Objects in ADRIFT are anything that can be seen, touched or referred to, and that are not characters. They are normally categorised as one of two types; Dynamic objects, that can be picked up and moved about, and Static, which cannot.

The Description tab allows you to set the name of the object, give it an initial location, and give it a description. 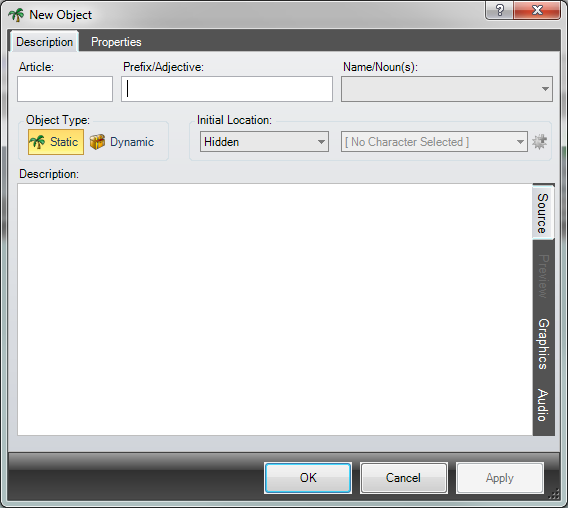 Article is a mandatory field. For most common objects you would normally insert an indefinite article here. This is normally used when a noun is being referred to for the very first time, and is  usually "a" or "an", but can sometimes be "some", "your", "Aunt Mary's" etc. in English.  ADRIFT will automatically accept the definite article ("the") when matching object names, and will replace the indefinite article with the definite article in prose when using the %TheObject[key]% or key.Name functions.  For unique objects like "the sword Excalibur" or even "the front door" you would insert "the" here.  If this object represents several objects, a powder or liquid, you can use the word "some", e.g. "some brass tacks" or "some washing powder".  If you have several similar objects that are each owned by a particular character, you could use the characters name as the article, e.g. "Belinda's mobile phone".

Prefix/Adjective is an optional field, but is used to distinguish objects with the same name, or to qualify the noun, giving more information about the object signified.  Multiple adjectives can be added, separated by a space.  However, all adjectives will be listed when the object is listed during play.  So for example, you might set this to "large green", "wooden", "fragile old" etc.

Name/Noun(s) is a mandatory field.  It is the main name of the object, and can typically be referred to uniquely during play to identify the object.  Multiple object nouns can be provided by typing the name and pressing <Enter>.  This will add a new entry to the drop down list.  To edit an existing entry from the drop down, simply select it and make any changes.  Similarly, to remove the entry, select it, then clear the value.  Only the first noun in the list will be used when listing objects during play.  However, all other nouns can be used to identify the object.

Object Type must be either Static or Dynamic.  A static object is something that normally remains at one location, such as roads, fences, and furniture, but also objects which are firmly attached to something else, such as the knob on a door or a somebody's arm.  A dynamic object is anything that can be picked up and carried around from place to place.

Initial Location is used to specify where this object will be located at the start of the game.  The first drop-down list has 6 options, and selecting one of these will change the type of item that can be selected from the second list.

Any object can be:

Additionally, Static objects can be:

Additionally, Dynamic objects can be: