The Movement tab allows you to create one or more routes that this character will follow, and actions they will perform at certain times.

Each of these independent routes and its associated actions is called a "Walk". 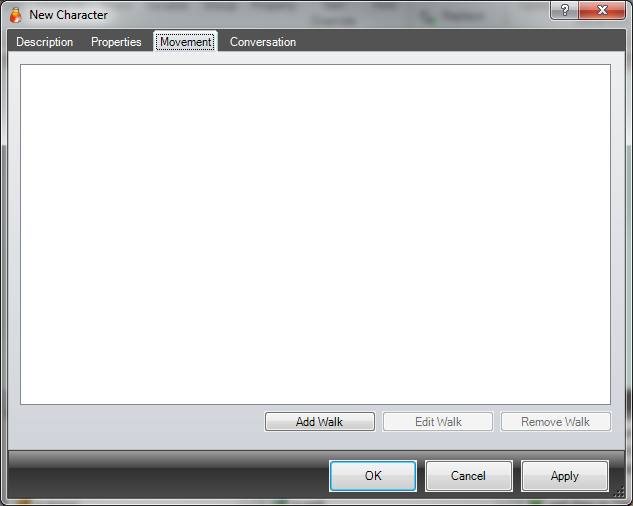 A character can have several walks, but will follow one walk at a time.

Clicking the Add Walk button will open the New Walk dialog which allows you to specify when the character will start a particular walk, the path they will follow, and activities they will perform along the way.  A walk consists of a series of locations, with each location stating how long the character should remain there.  This allows characters to walk along pre-defined paths.  You can also have a character roam randomly within a set of locations.  You can have characters carry out actions when they come across other characters or objects (such as picking up objects they might find). 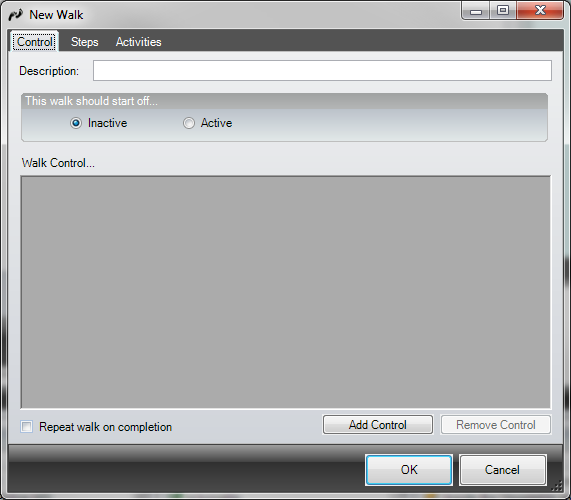 On the Control page you can give the walk a Description.  This is purely used within Developer to allow you to identify the particular walk.  You should name this something that uniquely identifies what the walk is for.

A walk can either start off Inactive (in which case it must be started at some point later in the game) or Active.  If the walk starts off active, the character will immediately move to the first location in the walk, staying there for the specified delay, then move on to the next location in the walk.

Walk Control allows you to control when walks should occur by starting and stopping them at particular times.

Each time the Add Control button is pressed it adds one Walk Control.  In the following image we have added two of them. 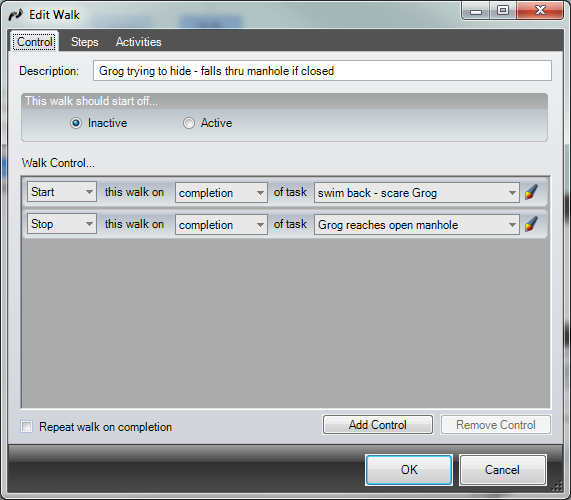 A walk control can Start, Suspend, Resume or Stop the character from following this walk.  The difference between Suspend and Stop is that any stopped walk will start again from the beginning, whereas if the walk has been suspended, it can be resumed from it's current position.

Each Control is triggered by the completion or uncompletion (an action unsetting) of a specific task.

button can be used to create a new task.

The Repeat walk on completion checkbox at the bottom left can be ticked to have the walk repeated continuously, otherwise it will run once and then stop.

On the Steps tab you can create the individual stages of the walk: 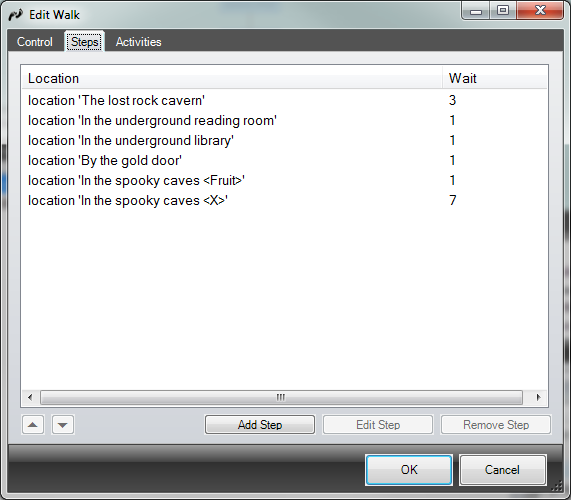 A step consists of a destination and a length of time to stop at that destination before moving on to the next step.

Press the Add Step button to create a new step and open the Step of walk dialog box:

Note that the house icon is a button that selects between 3 types of destination:

- You can select a particular location (or "Hidden") for the character to move to.

- Select a Character. This character will move to the same location as the selected character.  You could use this to have a henchman follow the player character wherever they go.

You must also specify how long the character should stay at that location before moving on to the next step of the walk.  For a fast moving character, this might just be 1.  (You can actually set this to 0 - just note that the character will then move twice within the same turn.  You could use this to have a character run.  If then ran through the location the player is at, you would see them enter and exit the room within the same turn.)

By pressing the "1:1" button you can toggle between entering a single number

and being able to enter a minimum and maximum period

to stay at that location. The character will randomly choose a number between the two values to determine how long to stay. 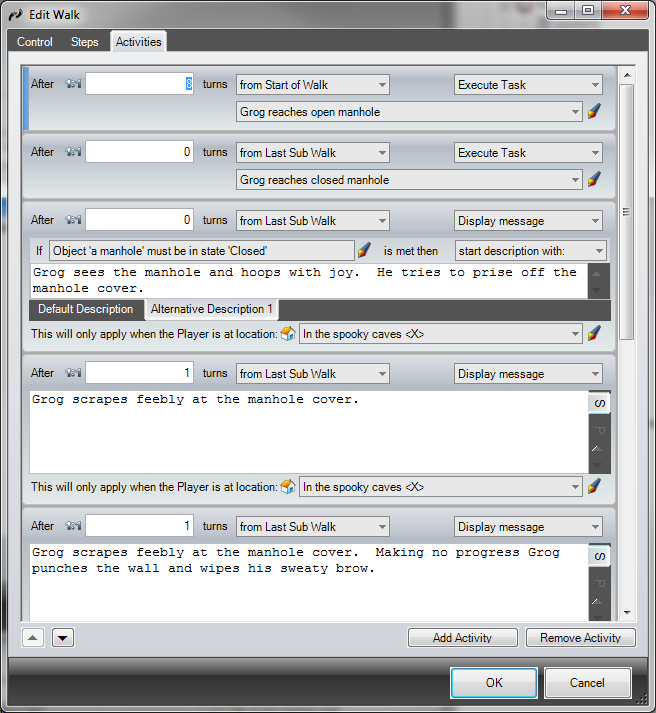 Pressing the Add Activity button adds an activity panel, similar to the ones shown above, to this page.

These operate in a similar way to Events.

You can specify a certain number of turns from the Start of the walk, from the last sub-walk, or before the end of the walk, to wait before starting this activity.

Using the "1:1" button you can specify a minimum and maximum number of turns to wait.

Alternatively, you can select character comes across and specify another character or an object that will trigger this activity if this character moves into the location that contains them.

If the next drop-down list has Display message selected, then triggering this activity will cause the contents of the following text-box to be shown.

At the bottom of the activity pane you can also specify a restriction that the text box will only be displayed if the player is at a specific location.

The text box can use alternative descriptions to modify the output, depending on other restrictions.

If you also need an activity to perform Actions, then change Display message to Execute task and select a task from the drop-down list (or create a new one with the  button).

An activity can also unset a task (so a non-repeatable task can be executed again).