Characters are any people, animals, monsters or other "alive" creatures in your game that can move about in the game, and possibly talk to the player.

When you create a new character, or edit an existing one, you will see this window: 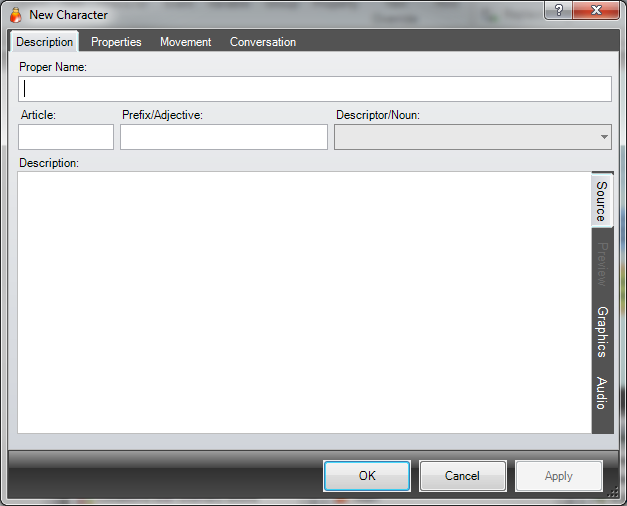 The Article field expects an indefinite article here.  This is normally used when a noun is being referred to for the very first time, and is usually "a" or "an", but can sometimes be "some", "your", "Aunt Mary's" etc. in English.  ADRIFT will automatically accept the definite article ("the") when matching character descriptors, and will replace the indefinite article with the definite article in prose when using the %CharacterName[key]% or key.Name functions.  For unique characters like "the butler" or "the King" you would insert "the" here.

Prefix/Adjective is an optional field, but is used to distinguish characters with the same name, or to qualify the noun, giving more information about the character signified.  Multiple adjectives can be added, separated by a space.  However, all adjectives will be listed when the character is listed during play.  So for example, you might set this to "attractive", "tall", "smelly old" etc.  If the character is described as "a tall thin Chinese man" then the player can enter any combination of adjectives, such as "tall Chinese man", "thin man", "tall thin man" etc.

Descriptor/Noun is the main descriptor of the character, and can typically be referred to uniquely during play to identify the object.  Multiple character nouns can be provided by typing the name and pressing <Enter>.  This will add a new entry to the drop down list.  To edit an existing entry from the drop down, simply select it and make any changes.  Similarly, to remove the entry, select it, then clear the value.  Only the first noun in the list will be used when listing characters during play.  However, all other nouns can be used to identify the character.

Either Proper Name or Descriptor/Noun must be supplied for a character, but neither are mandatory in themselves.

The Description text box is what is displayed when the player examines the character.

If your game contains the Is this character known to the Player property (i.e. you haven't deleted it) then the Proper Name is only used if this character has the known property checked.  If not, then the Article, Prefix/Adjective and Descriptor/Noun are used to describe what the character looks like, and can be entered by the player to refer to the character.  This is so that when you first come across a character, they will be described as "a tall man", "a plump old lady" etc, rather than "Albert", "Mildred" etc.  You can change whether the character is known during play (after having been introduced to them) by creating an action in a task such as the one below:

This is the default Properties page of a character: 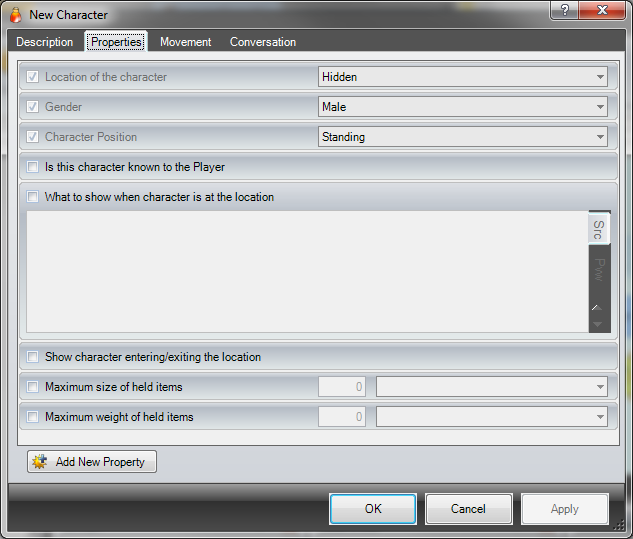 Here you can select various properties of this character.

To use the value of a property in an expression or a text box, use a character function.

If you create new character properties then they will be added to this page for all characters.

To create a new character property, click the Add New Property button.  This will bring up the New Property dialog box and default it to "Property of: Characters".