People often find events one of the more confusing parts of ADRIFT, but they're really not that difficult to understand.

This is an example from Jacaranda Jim, where if the player eats a fruit wall, they get sick and eventually die unless they manage to find a toilet.

So I have given the event a suitable name.  This event starts off Not Started because I want the trigger for it to be a particular task.  The event always runs for the same number of turns, so I have set the length explicitly at 17 turns. 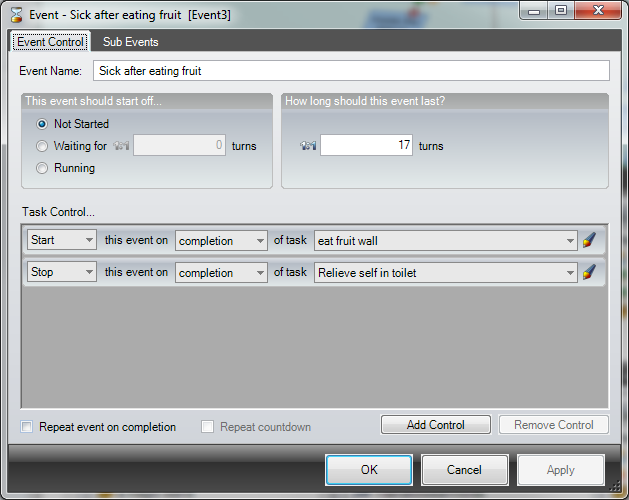 I want the trigger for the event to be when the player types "eat wall".  This is a task called eat fruit wall, so I created a Start task control, and selected this task from the list.

I also want the event to terminate if the player manages to find the toilet in time, so I created a Stop task control and selected the Relieve self in toilet task from the list.  This task is run whenever the player enters the location of the toilet having eaten the fruit.

I don't want the event to repeat as this is a once-off event.

There are several Sub Events that I need to add here.

I wanted to give three "warnings" to the player, so they know something is up.  The first warning should be 2 turns after the player eats the fruit, so I created a sub event 2 turns from the start of the event.  I want this warning to appear everywhere, so I left the dropdown at the default. 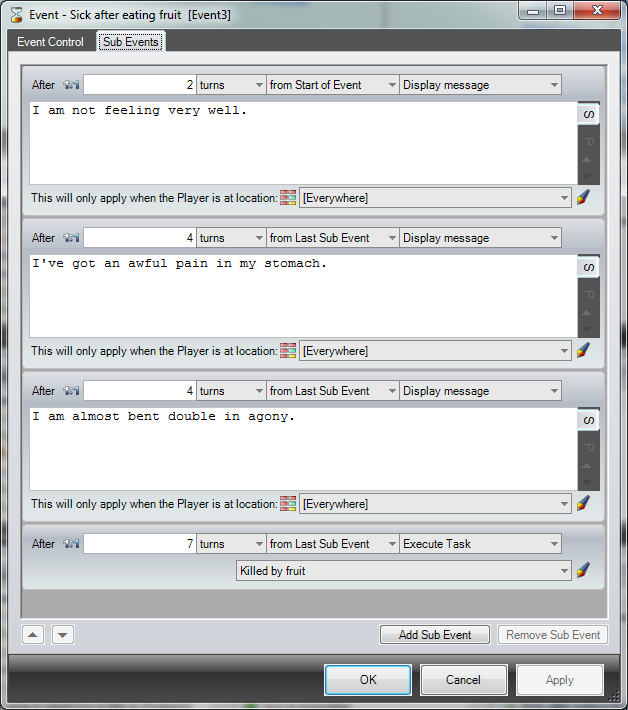 I wanted my second warning to appear 4 turns after the first, so I selected 4 turns from last sub event.  I could just as easily have set this to 6 turns from start of event, but that is not quite so easy to follow.  Again, this simply prints a warning message to screen.

I want my final warning to appear another 4 turns after the second, so I selected 4 turns from last sub event again.  I could also have set this to 10 turns from start of event, or indeed 7 turns from end of event.  Choose whatever makes most sense to you.

Finally, at the end of the event I want to actually do something (kill the player), so I need to run a task.  I set this to 7 turns from last sub event, but could also have set this to 17 turns from start of event, or indeed 0 turns from end of event.  The Killed by fruit task displays an appropriate message about feeling too ill, and the player is killed.

Note - if the event is terminated (i.e. the Relieve self in toilet task is run), any further messages will not be displayed, and the Killed by fruit task will never be run.